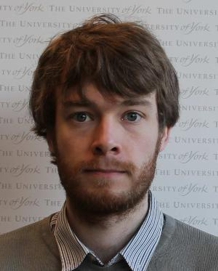 David Dickinson is a lecturer at the York Plasma Institute of the University of York. His primary research interests are in the area of plasma turbulence and associated instabilities for magnetically confined fusion plasmas. His research methods focus on advanced computing and associated theory. He has a particular interest in developing robust high performance simulation codes available to the plasma community. David graduated from the University of York with a PhD in 2012, following which he held CCFE and EUROFusion fellowships. He started his current role in 2016.